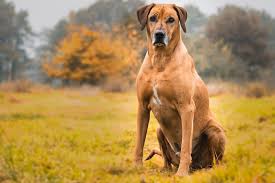 Rhodesian Ridgeback dog training requires special attention from the dog trainer. It is not a breed recommended for the inexperienced dog owners.

This breed of dog originating in Southern Africa is always enthusiastic and will be loyal to the family, but can make excellent hunters as well. It is an independent dog, this is why thorough Rhodesian Ridgeback dog training is required, and otherwise it can become destructive. The Ridgebacks may be excellent watchdogs, being very protective of their family, and very reluctant to strangers.

How to Train a Rhodesian Ridgeback

If you want to know how to train a Rhodesian Ridgeback, remember that you need to approach things differently, because this breed is not a usual one. You can start with crate training as early as you can. You can teach your dog by giving it light commands, but you have to take into account that it needs permanent change of the scenario, due to its intelligence. If you train the Rhodesian Ridgeback giving it the same games to play, it will easily get bored, and you will get no response.

Alphabetical List of Dog Breed Training – find trainig tips and photos for your dog breed below: